I’ve recently been playing Elvis’ last couple of non-compilation albums, From Elvis Presley Boulevard and Moody Blue, as well as associated outtakes on The Jungle Room Sessions and other releases. He recorded many of these songs in the den at Graceland in February and October of 1976.

I’ve also been listening to songs from Elvis In Concert, the first album released after he passed away, containing songs from his last concert tour in June 1977. 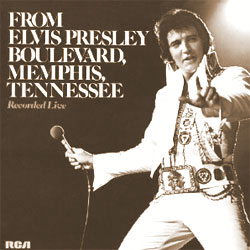 These recordings represent the last audio documentation we have of Elvis Presley the artist. From Elvis Presley Boulevard and Moody Blue are two of his finest albums. By this time, Elvis was apparently reluctant to record, so it is only through the efforts of people like producer Felton Jarvis that we have these recordings at all.

Boulevard has a thematically dark tone, established right from the beginning. If your Elvis experience is limited to the likes of “Blue Suede Shoes” and “Hound Dog,” it can make for some revealing and, at times, difficult listening.

I’m so hurt to think that you lied to me. I’m hurt way down deep inside of me. You said our love was true, and we’d never part. Now you want someone new, and it breaks my heart.” –From “Hurt,” Elvis Presley song, 1976 (written by Crane/Jacobs)

The pain is so evident in his voice as he pours out what is left of that broken heart. Reluctant or not, the results are some of the most honest music of his life.

What will become of me when you’re no longer here? If I can’t stop loving you, what am I to do? You’ll be free, but where will I be?” –From “Never Again,” Elvis Presley song, 1976 (written by Wheeler/Chesnut)

Let there be no doubt that Elvis could still rock, though. In the midst of Boulevard‘s otherwise slow songs suddenly appears “For The Heart,” and Elvis tears it up.

Though a gloomy tone is still present, Moody Blue lightens things up a bit compared to Boulevard. Rockers “Way Down,” “Moody Blue,” and a fun 1977 live version of “Little Darlin'” help in this regard, as does a 1974 live recording of “Let Me Be There” – first released on Elvis Recorded Live On Stage In Memphis.

I can still remember the first time I played Moody Blue. It was an album I borrowed from the local library, before I had any Elvis records of my own. I was fascinated by the fact that the record was blue rather than black. It began with a beautiful, haunting version of “Unchained Melody.” That song, as well as “Little Darlin'” and “Way Down” caught my attention, though I remember listening to the whole record over and over. What a perfect Elvis album.

This turned into a longer post than I first planned. All I really wanted to say was how much joy listening to these songs has brought me in the last couple of days. Sometimes, you can listen to something in a whole new way. A song you’ve heard a hundred times can suddenly sound new.

That’s the great thing about being an Elvis fan, there is so much music out there to explore. I’ll never stop listening.

One thought on ““Together all alone””