You may find this hard to believe, but I often associate Elvis On Tour with Christmas. That’s because the first time I ever saw the movie was on Christmas Day 1989. I was 14-years-old, and Elvis On Tour on VHS tape was one of the gifts my Mom gave me that day. 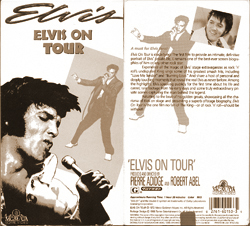 While waiting for my family to finish unwrapping their presents, I studied the box art. I noticed that the box featured images from That’s The Way It Is. As soon as all the presents were done, I placed the VHS tape in the VCR and fired it up.

Elvis On Tour was the first Elvis video I ever owned. The ’68 Comeback Special, One Night With You, That’s The Way It Is, and Aloha From Hawaii videos that I had already so often watched actually belonged to my brother.

Elvis On Tour was different from the others, though. It featured Elvis on the road across the country, performing in sold-out coliseums. While the crowds in the other videos were often reserved, these fans treated Elvis to thunderous applause and cheers. During a montage sequence, we were all shocked to see images of our hometown.

Seeing Elvis On Tour for the first time was special to me. Now that it is going to show in US theaters as well as be released for the first time on Blu-ray and DVD, there are other Elvis fans out there who have never seen it before who will finally get the chance. Christmas or otherwise, they will be in for a real treat.