The Richmond show has received a new mastering by Vic Anesini. Though presented in mono from a tape copy, apparently the concert was professionally recorded and mixed in multi-track.

According to Robert Frieser’s liner notes, the original multi-track recording is either missing or erased. Speculation is that it was a backup for the album Elvis Recorded Live On Stage In Memphis, which took place two days later at the Mid-South Coliseum.

The March 18 Richmond Coliseum concert was only six days after his March 12 appearance there. After visiting other cities, the tour swung back through Richmond due to a rapid sell out of the earlier show.

Richmond references
Track 04 at 0:02: Elvis says, “It’s a pleasure to be back here in Hampton Roads, uh, Richmond! Just kidding, just kidding.”
Track 15 at 2:23: Elvis says, “I’d like to thank the John Marshall hotel, where everybody’s staying, for taking care of us over there.”
Track 21 at 0:00: Elvis says, “You’re a fantastic audience, you really are. Until the next time here in Richmond, I’d like to wish you an affectionate adiós.”

As with other releases on Sony’s FTD collectors label for Elvis fans, the only physical store in the US authorized to sell the CD is Good Rockin’ Tonight, a Graceland gift shop in Memphis. However, the CD may be obtained online from a variety of other Elvis stores, including Graceland’s ShopElvis.com.

The CD comes in an oversized, 7-inch digipack that includes a 16-page booklet with photographs from the show. It marks the first official release of a Richmond Elvis concert. 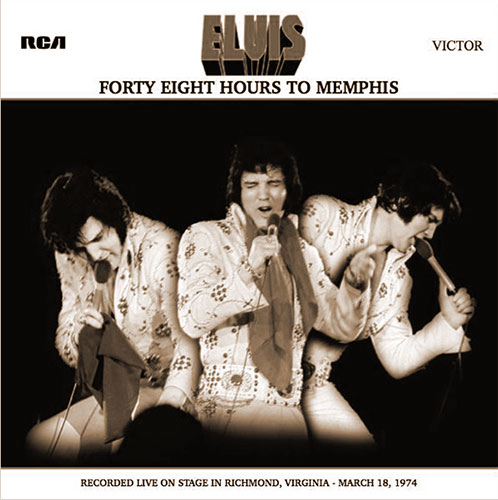 7 thoughts on “Elvis Back In Richmond: Forty-Eight Hours To Memphis now available”