“Sylvia Brendle was a high school junior when she snapped a never-before-seen picture of Elvis at the Mosque in May of 1955,” McQuade states (“Elvis fan shares unseen photo as new exhibit opens at VMFA” — wtvr.com).

The photo is significant to Richmond fans in particular because the May 16, 1955, concert at the Mosque was the first time Elvis appeared here in Richmond. The singer was still on the SUN Records label at the time. Just six months later, he would sign with RCA Records and soon go from being a regional star to an international one. 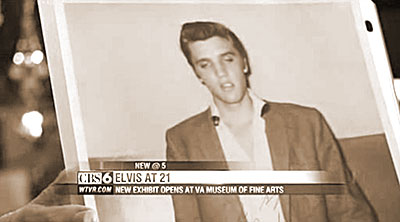 Also covered in McQuade’s story is the Elvis At 21 exhibition at the Virginia Museum of Fine Arts. The exhibition features legendary photos of Elvis snapped by photographer Alfred Wertheimer, including several of Elvis in Richmond in June 1956.

Elvis eventually did 15 shows in Richmond, the last one in 1976.