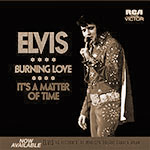 Overall, I listened to 19,917 songs using iTunes or my iPod this year. That works out to 55 songs a day. My daily average in the last two years was about 44. The increase is probably due to this year having the capability to play my iPod in the car.

When I first started this blog, I mentioned that the soundtrack of my life was powered by Elvis. I’m happy to say, that hasn’t changed.

“There are many things about my father, Elvis Presley, that so many others and I can admire eternally. He rose from humble beginnings and when the realization of his dreams and aspirations exceeded all that he had imagined, it gave others hope – a new awareness of their own potential, whatever challenges they might be facing in life. With his success came the accolades and respect he deserved. However, the fame also brought with it a harsh kind of scrutiny and judgment that no one should ever have to experience. The truth of his artistry and his character always rose above this. It always will. His place in our musical and cultural history, and in so many hearts, will always be secure.

One of the very special aspects of Elvis Presley’s character was his generosity of spirit. He expressed it with benefit concerts and charitable donations that were well known by the public. But most of what he did for others was done quietly, without publicity. My father never once forgot what it was like to want, to need, to do without. He spent most of his life bringing happiness to others, endlessly giving to those around him. It is one of the things that I admire most about him.”
-Lisa Marie Presley, ca. 2001

Any original material is copyright © by the author, 2010-2023. Unauthorized use and/or duplication of this material without express and written permission from this blog’s author and/or owner is strictly prohibited. Excerpts and links may be used, provided that full and clear credit is given to The Mystery Train Blog with appropriate and specific direction to the original content.

Any trademarks or copyrighted material mentioned or displayed are registered and copyrighted by their respective owners. No infringement is intended. This independent site is not affiliated with Elvis Presley Enterprises, Graceland, or any other entity related to the Presley family. Views and opinions expressed in comments, guest blogs, and off-site links are solely those of the respective authors. This site does not sell ads, collect fees, or participate in affiliate marketing programs.