My favorite album released during Elvis Presley’s lifetime is That’s The Way It Is. First hitting record stores in November 1970, it features studio material from his June recordings in Nashville as well as four live cuts from his August Las Vegas engagement. It serves as a soundtrack of sorts for the excellent documentary of the same name, also released that month.

Despite the status I give it, the album is not perfect. Rock ‘n’ roll fans sometimes dismiss it as an easy-listening bore. One of the causes of that issue, I believe, is the sequencing of songs. Many of them should have been presented in a different order. For instance, the album unfortunately begins with a live version of the sleepy B.J. Thomas hit “I Just Can’t Help Believin'” and establishes the wrong tone.

Adding to the trouble, two of the live performances, “Patch It Up” and “I’ve Lost You,” are not as powerful as their studio counterparts, which should have been used instead. The studio recordings had been released as singles prior to the album, so the live versions were likely considered bonuses for fans that already had the 45s. The artistry of the album should have taken priority, though.

Apparently to complete the “feel” of a live album, RCA overdubbed applause on the end of the studio version of “Bridge Over Troubled Water,” which closed out That’s The Way It Is. Elvis’ vocals on the first verse of the song are also very faint in the mix, either on purpose or due to a technical glitch. You can better hear Elvis’ beautiful performance of this song, with his voice louder on the first verse and without the annoying applause overdubs, on Heart & Soul and the Elvis: Walk A Mile In My Shoes-The Essential 70s Masters boxed set.

“I Just Can’t Help Believin'”
Live Master–8/11/1970 Dinner Show (DS): As noted above, the song does not serve well as an album opener. While it is misplaced on the album, the performance is strong. I love the little traces of humor in his voice. He sounds on the verge of laughing a couple of times. Also memorable is his interaction with the Sweet Inspirations throughout (“Sing the song, baby”). Elvis would never be quite as incredible again live as he was in this engagement.

“Twenty Days And Twenty Nights”
Master–Take 9: For me, this song represents the adult Elvis, the recording artist that is too often overlooked. “Twenty Days And Twenty Nights” is about a man who regrets leaving his wife, and Elvis evokes this character through music as well as any actor could on screen. The performance plays through the range of emotions, even striking a hopeful tone (“One day soon I’m going back…”) before falling back into despair as he laments “Oh, how I miss her,” over and over at the end.

“How The Web Was Woven”
Master–Take 3: The highlight of the album, “How The Web Was Woven” is a love song that ranks right up there with the better-known “Can’t Help Falling In Love.” From the acoustic guitar opening to the accompanying piano, the arrangement on this one works very well. “At last, I’m where you want me . . . Don’t you know that’s where, where I wanna be,” he sings with a passion that, for this listener anyway, exceeds even the incredible American Sound sessions in Memphis the year before.

“Patch It Up”
Live Master–8/12/1970 DS: Compared to the excellent studio take, this live version sounds almost like a throwaway. Watching this same energetic performance in the film, though, is an entire other experience.

“Mary In The Morning”
Master–Take 5: This is a pretty, if forgettable, love song. It goes on a bit too long and eventually becomes tiresome.

“You Don’t Have To Say You Love Me”
Master–Take 3: Though it is a fine performance, I would have chosen “How The Web Was Woven” or one of the others as a single over Elvis’ version of the Dusty Springfield hit.

“You’ve Lost That Lovin’ Feelin'”
Live Master–8/12/1970 MS: This live performance is the definitive version of this song by anyone. This is Elvis at his best: “It makes me just feel like cryin,’ ’cause baby . . . something beau-ti-ful’s dy-in.'” The Righteous Brothers sound like they are singing a lullaby in the original recording compared to the Elvis version. Even Elvis was never able to equal his own performance again in other concerts.

“I’ve Lost You”
Live Master–8/11/1970 DS: While I love this live performance of “I’ve Lost You,” I prefer the studio version featuring more complicated lyrics and arrangement. That being said, this is still a highlight.

“Just Pretend”
Master–Take 3: Picking up where “Twenty Days And Twenty Nights” left off, this turns the despair of a man who left his lover and turns it back to hope for reconciliation. “Now I know, it was wrong to go, I belong there by your side,” he sings, bordering on the type of apology song that Elvis would perfect a couple of years later with “Always On My Mind.” The impressive “Just Pretend,” with a gospel-inspired arrangement, is another all-time favorite.

“Stranger In The Crowd”
Master–Take 9: This is yet another highlight. The band really cooks on this one. For some, Elvis Presley brings to mind “Hound Dog,” “Don’t Be Cruel,” “All Shook Up,” and similar tunes. While those are all fine, when I think of Elvis, I think of songs like “How The Web Was Woven,” “I’ve Lost You,” and “Stranger In The Crowd.”

“Bridge Over Trouble Water”
Master–Studio Take 8 (with overdubbed applause): I stopped listening to the original album version of this song once RCA finally released a proper studio track. The one on this album simply does not do justice to his performance. The Heart & Soul version, though, I would contend as the best version of this song by anyone.

Upon its original release, That’s The Way It Is faced stiff competition from none other than Elvis himself. In their infinite wisdom, his record label released the following Elvis music in October and November of 1970:

Despite the oversaturation, That’s The Way It Is made it to number 21 on the charts and obtained gold record status. It probably would have done even better had fans not been so bombarded with Elvis product in the fall of 1970. 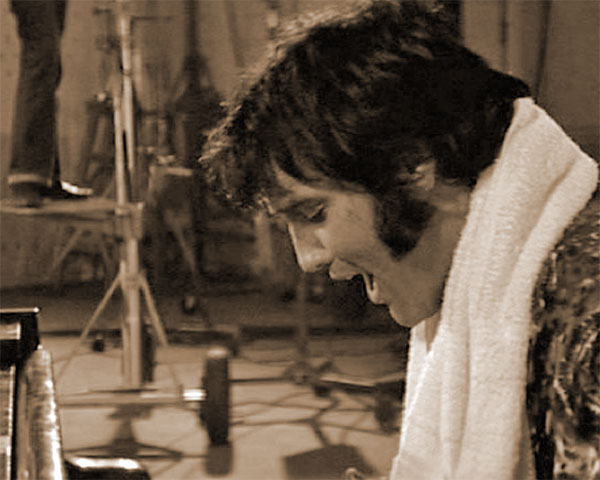 Elvis rehearsing How The Web Was Woven, 1970

No matter the order you listen, though, That’s The Way It Is represents a true Elvis masterpiece.

Portions of the above review originally appeared on my now defunct pop culture blog on May 21, 2008.