This is Part 4 of an ongoing series reviewing Elvis: The Complete Masters Collection. Read Part 3. 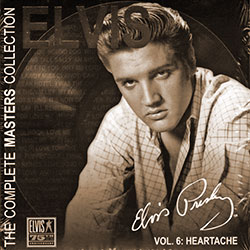 This volume of The Franklin Mint‘s 36-disc Elvis: The Complete Masters Collection (mastered by Vic Anesini) presents songs falling under the theme of “Heartache.” The booklet describes this disc as “Twenty haunting melodies that reveal Elvis’ familiarity with the darker side of love.”

Heartache is certainly a theme Elvis revisited often in his recordings over the years. Many of my favorite Elvis songs would probably fit into this category, so I’m excited to give Heartache a spin.

01. That’s When Your Heartaches Begin: Elvis actually first recorded “That’s When Your Heartaches Begin” as a demo at the Memphis Recording Service in 1953. This is his professional version, though, recorded four eventful years later for RCA. He does a masterful job with the song, including the spoken-word recital in the middle – a technique that he would perfect even further a few years later with the similar “Are You Lonesome Tonight.” (Recorded: 1957)

02. Don’t: If you listen too closely to the words to “Don’t,” it can actually sound creepy from a modern perspective:

“Don’t, don’t,” that’s what you say each time that I hold you this way. When I feel like this and I want to kiss you, baby don’t say “don’t.”

This song should be judged within the context of innocence from which it sprang, though. The Jerry Leiber & Mike Stoller song features masterful lyrics, indicative of the quality of material Elvis lost out on when his association with that team ended. “Don’t” includes a quite beautiful and sincere love pledge:

I’m your love and yours I will stay. This you can believe, I will never leave you, Heaven knows I won’t.

Oddly, this track has about ten seconds of extra silence at the end once the song concludes – not reflected in the runtime on the CD sleeve, either. (1957)

04. Starting Today: “Starting Today” is the first of four songs written by Don Robertson that appear on Heartache. This is a quiet, likable song. (1961)

08. Suspicion: Doc Pomus delivers the goods again, this time with the fantastic “Suspicion.” I first heard this song on a cassette variant of Elvis Country and have loved it ever since. (1962)

09. She’s Not You: “I’d trade all of someone new for anything that’s part of you,” lamented Elvis in “Anything That’s Part Of You.” On “She’s Not You,” though the writers are different, he continues that theme: “She’s everything a girl should be, but she’s not you.” For this song, Doc Pomus teamed up with Leiber & Stoller, ensuring a sure-fire hit when also combined with another great performance by Elvis. The original pressing of Franklin Mint’s Elvis: The Complete Masters Collection contained an error on this track – the last several seconds were missing. They issued replacement discs and subsequent pressings (including mine) have not had this error [6]. (1962)

10. They Remind Me Too Much Of You: More from the pen of Don Robertson, “They Remind Me Too Much Of You” again continues the theme of “Anything That’s Part Of You” and “She’s Not You,” except now the singer has reached the stage where he wants all reminders of the love gone wrong wiped away. Robertson’s lyrics are masterful at portraying the anguish: “Must I evermore be haunted, day after day my whole life through, by the memory of each moment that I spent alone with you?” (1962)

11. What Now, What Next, Where To: “What Now, What Next, Where To,” while still lamenting a lost love, manages to strike some hopeful tones as well. This is the fourth and final Robertson composition on Heartache, wrapping up this mini-storyline as the singer finally moves on. I have to give the compiler credit for putting all of these songs together, actually making for a coherent album of sorts. (1963)

14. I’ve Lost You [Live]: After two duds in a row, Elvis’ live version of “I’ve Lost You” is a welcome reprieve. While not as interesting as the studio version, this is still a fine performance in its own right. I love how his voice nearly blends with the Sweet Inspirations as the chorus repeats at the song’s end. (1970)

15. When I’m Over You: Like most songs, “When I’m Over You” is better than “It Ain’t No Big Thing,” but it is still one of the weaker songs from the 1970 Nashville sessions. I do enjoy the gospel sound that the background vocalists bring to the song. (1970)

16. I Will Be True: Accompanying himself on piano, Elvis takes on the Ivory Joe Hunter song “I Will Be True.” A decent performance, with much conviction. (1971)

17. Love Me, Love The Life I Lead: Elvis did not write this song, but it sure sounds like he could have:

Unfortunately, though Elvis must have connected with the lyrics, the song never really develops – a good song that probably could have been better. (1971)

18. Thinking About You: Featured on the Promised Land album and recorded at Stax Studio in Memphis, “Thinking About You” is one of Elvis’ best country songs. Wow, does it sound great on this set. Nice to have the original mix back. (1973)

20. Woman Without Love: “Woman Without Love” is the worst of the songs Elvis recorded at his March 1975 Hollywood session that produced the very solid Today album. Unless I’m listening to the entire album in context, I always skip this dreadful song. (1975)

Though it contains a few duds (this is a complete masters collection, after all), Heartache is overall a stellar collection of songs. The early 1960s tracks in particular are real highlights.