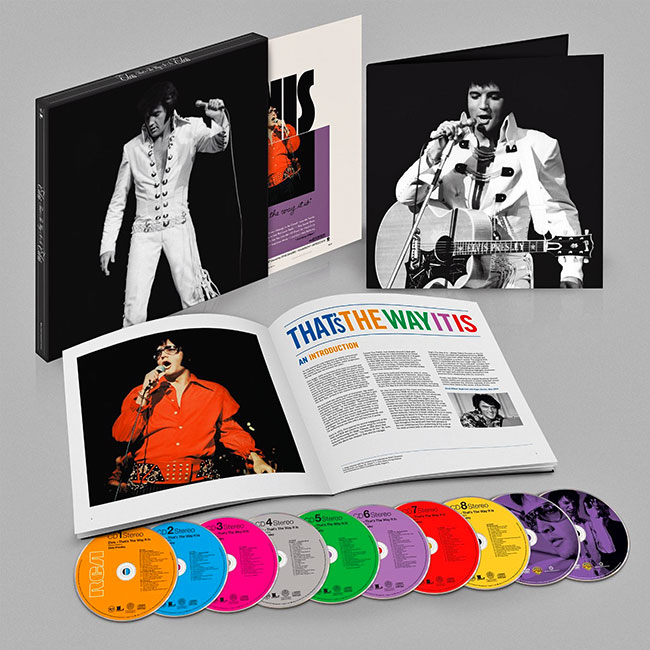 On June 4, Sony finally unveiled the full track listing for its 10-disc Elvis: That’s The Way It Is – Deluxe Edition. To be released on August 5, the set will contain eight CDs and two DVDs focused exclusively on Elvis Presley in June through August of 1970.

While much of the material is previously released, the set features the debut of the complete August 11 Dinner Show and the August 12 Dinner Show from his summer engagement at the International Hotel in Las Vegas.

Compared to the 3-CD “Special Edition” version of That’s The Way It Is released in 2000, Disc One is a huge improvement in terms of track selection. The 2000 release muddied the waters by including inferior songs that had nothing to do with That’s The Way It Is. This new version wisely rounds out the initial disc instead with the album’s associated singles (presumably in original mono), as well as a few choice outtakes. This will likely be similar if not identical to Disc One of the 2-CD That’s The Way It Is Legacy Edition due out the same day. Contents of that release have yet to be revealed, however.

Maybe cover art does not make that big of a difference, but this new set also beats out the 2000 set in that regard. The artwork for this 2014 release is stunning – with a simple design based on original 1970 elements. The artwork from the 2000 set was quite poor.

Despite a long, repetitive press release of headache-inducing platitudes, details beyond the tracks are still scarce. There is no information yet on who has performed the mixing or the mastering on the new set. This will be key on the previously released portions, as uniform, upgraded sound across the various concerts and rehearsals would be desired. My hope is that those credits will include Vic Anesini.

While I refuse to use the term “disappointing” on a dream release such as this, there are at least three discs that leave some room for questions.

Disc Eight: The Rehearsals is the biggest head-scratcher. While only two of the six That’s The Way It Is concerts remained unreleased in relatively complete form, hours more previously unreleased rehearsal material is still available that could have been included here. This was one area where the set had a chance to surprise fans and bring more value. Instead, all of the rehearsals are previously released.

Beyond that, several of the tracks chosen for the rehearsal disc are of questionable value. While fun for one listen, Elvis joking around on the wretched “Froggy Went A-Courtin'” certainly does not deserve to appear on a second high-profile boxed set in twenty years. Similarly, Elvis joking around with “Alla En El Rancho Grande” and “Cotton Fields” adds little of substance in their second outings on a mainstream boxed set.

Many of the other rehearsal selections are solid, though, if Sony was for some reason insistent on going the previously-released route. Sound quality on “Farther Along,” “Santa Claus Is Back In Town,” and “Oh Happy Day,” was abysmal on the 2000 set, so there is an opportunity here for an audio upgrade.

Despite my misgivings, “The Rehearsals” on this 2014 set has a very real chance to be better than its disappointing counterpart on the 2000 set (Disc Three). In fact, it was only Disc Two: The Concert – the debut of the stellar August 12, 1970, Midnight Show that saved that 2000 set. Since Sony is not likely to revisit the That’s The Way It Is material anytime soon after this 10-disc set and the Legacy Edition 2-disc set, this opens the door for its FTD collectors label to release additional That’s The Way It Is rehearsals in the near future.

It is hard to imagine that anyone plunking down the money to buy a 10-disc That’s The Way It Is release will not already have DVDs of the 2001 and 1970 editions of the documentary of the same name. Essentially, these two DVDs appear to be the same as Warner Home Videos’s 2007 That’s The Way It Is “Two-Disc Special Edition” release.

My guess is that there is some “behind-the-scenes” reason for the inclusion of these DVDs that has more to do with inter-corporate deals than the supposed “clamoring” of fans. My assumption is that including the DVDs made this set possible in some way, so I am not going to harp on them.

I did have to laugh, though, when I noted that Warner’s tried-and-true cover photo serves as the disc label of one of the documentary DVDs in the far right of the photo above.

When it comes to the documentaries, though, my focus will be on Warner Home Video’s Blu-ray edition, which will come out a week after this set.

In any event, here is Sony’s press release and the track-listing for Elvis: That’s The Way It Is – Deluxe Edition, which very well might become and forever remain my most prized Elvis audio release.

In 1970, Elvis Presley fans were thrilled by the arrival of two cultural milestones: one an album, the other a full-length concert/documentary and each of them called Elvis: That’s The Way It Is. Since then, aficionados of Elvis have been clamoring for a package that included both the album and the film.

On Tuesday, August 5, 2014, Legacy Recordings, the catalog division of Sony Music Entertainment, will release That’s The Way It Is (Deluxe Edition), the most ambitious Elvis Presley restoration package ever created, bringing together—for the first time ever–the album, the theatrical and home video versions of the film, six full-length concerts (featuring previously unreleased performances), rehearsal highlights and other rare recordings in one astounding and essential package. The result of an historic partnership between Sony Music and Warner Brothers Home Video, the deluxe set combines the video and audio assets of Elvis: That’s The Way It Is with unique and previously unreleased material.

Originally released on RCA Records in November 1970, Elvis: That’s The Way It Is combined eight studio tracks, recorded in Nashville, and four live concert performances recorded in Las Vegas during Presley’s 1970 “Summer Festival” season at The International Hotel in Las Vegas to create what the All Music Guide has called “…one of his best…” and “essential listening for Elvis fans, both die-hard and casual.”

Though never considered a soundtrack album, Elvis: That’s The Way It Is was initially released to accompany the first theatrical run of Elvis: That’s The Way It Is, a 1970 documentary feature, directed by Denis Sanders, which combined on-stage, off-stage and behind-the-scenes footage in Presley’s first non-dramatic film since his 1956 Hollywood movie debut. In the documentary, Sanders captured and illuminated a pivotal moment in Elvis’ transformation from teen idol to consummate showman, Memphis meets Vegas via Hollywood, the King’s return to full concert performances after years of film stardom.

Elvis Presley had made a dramatic comeback two years prior to these shows in a transcendent NBC-TV special, which aired in December 1968. The International Hotel, then-newly-built and the largest live venue in Las Vegas, booked Presley for an unprecedented 57 show run in July 1969, a four-week-long residency that would raise the bar and set the standard for superstar entertainment in Vegas and beyond. “There are several unbelievable things about Elvis, but the most incredible is his staying power in a world where meteoric careers fade like shooting stars,” Newsweek wrote of his incredible new approach to live performance at the time, while Rolling Stone lauded Elvis as “supernatural–his own resurrection.”

Early in 1970, Elvis returned to Vegas for a second engagement at the International, with RCA recording songs for the then forthcoming On Stage, February 1970. Elvis was on a roll and making big plans–including a feature film–surrounding what would be his third Las Vegas engagement, scheduled for the summer of 1970.

On June 4, 1970, Elvis arrived at RCA’s Studio B in Nashville, where producer Felton Jarvis had assembled a hot new session band featuring Elvis’ on-stage guitar legend James Burton. Five nights of recording generated material for no less than three future albums and four singles, including Elvis: That’s The Way It Is and the essential Elvis Country album.

On July 14, rehearsals for the movie and live shows commenced at the MGM lot in Culver City, California. The Hollywood cameras rolled for five different rehearsals prior to the opening night on August 10, including augmentation run-throughs with the singers and the orchestra at the hotel. Unquestionably, Elvis was keen to broaden his repertoire for the film, as more than 60 songs were attempted during the period, far more than the usual average of 20 to 25 that would normally be chosen. Over the four nights filmed by MGM, Elvis and his band worked tirelessly, trying out a broad variety of musical styles, emphasizing his desire to share the wide range of music he loved with his audience. Director Denis Sanders captured the end result magnificently, providing fans throughout the world with their first glimpse of the new contemporary Elvis performing at the peak of his vocal prowess both in rehearsal and on the stage.

That’s The Way It Is (Deluxe Edition) centers on the six complete shows recorded and partially filmed by MGM. Two of the shows are released for the first time in their entirety; two more have only been available only through the mail-order Elvis fan-club network. The original RCA album is expanded with the four single sides from the period, and a selection of “fly-on-the-wall” outtakes from the June Nashville sessions that produced the majority of tracks for the album. Completing the audio section, a separate disc of insightful rehearsal highlights, featuring unusual song selections showcases both the hard work and the playful atmosphere that governed Elvis’ relationship with his musicians.

The original Elvis: That’s The Way It Is includes fiery renditions of “You Don’t Have To Say You Love Me,” previously a hit for Dusty Springfield; “You’ve Lost That Lovin’ Feelin,’” made famous by The Righteous Brothers, and a show-stopping rendition of Simon & Garfunkel’s “Bridge Over Troubled Water.” The original album and singles will fill Disc One of the new edition, with six CDs worth of concert performances and one of rehearsal takes from the Summer of ’70 International Hotel residency.

That’s The Way It Is (Deluxe Edition) puts the original RCA album and the 1970 MGM documentary feature together in a single package for the first time. It includes both the original theatrical DVD version (1970) and the re-edited and extended DVD version from 2000.