“Welcome to the big, freaky International Hotel, with these little, weirdo dolls on the walls and these little funky angels on the ceiling. You ain’t seen nothing until you’ve seen a funky angel, boy. I tell you for sure.”
–Elvis Presley, 1969, on the ornate design of the hotel’s concert showroom

The concert series, which spanned 57 shows from July 31 to August 28, represented the singer’s first appearance on a public stage in nearly 9 years – though he had performed 4 shows in front of small audiences at NBC’s studio in Burbank, California, as part of taping his ELVIS television special the previous summer.

RCA cherry-picked 12 of the strongest performances from 3 of the 1969 shows to form the Elvis In Person portion of the From Memphis To Vegas/From Vegas To Memphis double album, released in November 1969. A year later, RCA re-released Elvis In Person as a stand-alone album with the same content.

As for the rest of the performances, they amazingly remained in the vault until after Elvis’ death. While RCA released several individual songs over the years, including a compilation disc on 1991’s Collectors Gold boxed set, a complete 1969 show did not officially surface until 2001’s Live In Las Vegas boxed set.

By the time of Elvis Live 1969 last year, however, 7 of the 11 shows had already been released in their entireties on CD, with a good portion of songs from 3 of the 4 remaining shows having been released as well – many of them on Sony’s Follow That Dream (FTD) collectors label for Elvis fans.

Elvis Live 1969 stands out among the previous releases because it gathers all of the recordings in one place for the first time, with homogeneous sound quality. The recordings capture the August 21-26 portion of the engagement. 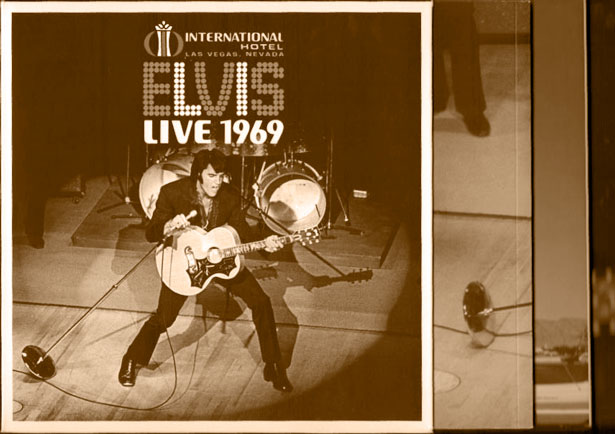 Mixed by Matt Ross-Spang in what was apparently a marathon session, Elvis Live 1969 features a “slapback” echo effect mimicking the sound of Elvis’ first recordings in 1954 & 1955 at Sun Studio in Memphis. Ross-Spang had applied the same effect to alternate takes on 2016’s Way Down in the Jungle Room, an overview of Elvis’ last formal recordings in 1976 at Graceland.

As it was not representative of the original intent in 1976 or 1969, some fans have been quite critical of Ross-Spang’s slapback effect. As for me, I don’t mind it at all. It breathed some life into the 1976 studio recordings and brought Elvis’ music full-circle, in a sense, with an homage to the Sun sound. Though less effective on the 1969 live recordings, it’s not too distracting. On a few songs, such as “Mystery Train,” which of course originated in the Sun era anyway, the effect can actually be phenomenal.

Where I differ from Ross-Spang on Elvis Live 1969 is on some of his mixing choices, especially as far as which instruments are prominent. For instance, horns overwhelm a portion of James Burton’s lead guitar solo in the middle of the “Blue Suede Shoes” opener on all 11 shows. The horns weren’t even audible at all during Burton’s solo on the original Elvis In Person album and most of the subsequent revisits of this material.

The horns distracting from the lead guitar vaguely reminds me of Elvis’ February 11, 1956, appearance on Stage Show (CBS), the Jackie Gleason-produced television series hosted by Tommy and Jimmy Dorsey. In his third of six appearances on the program, Elvis debuts “Heartbreak Hotel” for the national TV audience. At the point where Scotty Moore would normally rip into his now classic electric guitar solo, a trumpeter improvises a jazz-inspired solo instead. While I enjoy jazz, it did not work in the context of this rock ‘n’ roll song. Fortunately, Moore is able to let loose in performances of “Heartbreak Hotel” on two subsequent shows. The 1969 “Blue Suede Shoes” is thankfully not affected to nearly this extent, though, for Burton is at least playing his solo!

Another example is that Larry Muhoberac’s piano is mixed far too loudly on certain shows, especially the August 26 Midnight Show, the last 1969 concert captured. Was Ross-Spang running out of time or is this truly how he felt the show should sound? “Mystery Train/Tiger Man,” which should be a showcase for the guitar and drums, suffers greatly from the distracting and overbearing piano in this particular show.

The August 25 Dinner Show and August 26 Dinner Show versions of “Mystery Train/Tiger Man” are similarly impacted by too much piano in the mix. Five of the remaining shows that include this medley fortunately keep the piano at low or moderate volumes, while the August 25 Midnight Show version, which was the performance used as the master on Elvis In Person, actually strikes a great balance – having the piano quite present but at an appropriate level.

Of course, it is all a matter of taste. For an Elvis live show, I want the lead guitar (Burton), Elvis guitar (when applicable), drums (Ronnie Tutt), and bass (Jerry Scheff) prominent in the mix among the instruments, generally in that order of priority, but certainly varying to some extent per song.

The rock ‘n’ roll numbers, at least, should heavily feature guitar, drums, and bass. That is the core of rock ‘n’ roll, Elvis style. The piano, other guitars, and orchestra should be present as needed, but not so much as to overwhelm that core. The piano is far less annoying on a slow song like “Love Me Tender,” for instance, where it better suits being prominent in the mix.

To be clear, the mixing on the majority of these shows is great. For example, “Mystery Train/Tiger Man” is mixed to perfection on the August 22 Midnight Show and is of course buoyed by a committed and powerful vocal performance by Elvis, as with many of the songs in this boxed set. This version of “Mystery Train” I can’t help but crank up every single time it comes on, much as I do with the 1955 Sun studio master.

Ross-Spang also tends to favor the Sweet Inspirations over the Imperials, as far as the background vocalists – an approach I heartily support. Millie Kirkham notwithstanding, Elvis sounds better with female voices behind him instead of males, and I love the Gospel-infused quality of the Sweet Inspirations. I should note that I intend no disrespect to any of the musicians and singers involved, all of whom are very talented. I am just talking about how I best feel the music when it comes to Elvis.

Before I get too far off track here, I think that covers it for the technical aspects of the set. I actually wasn’t even intending for this to become a review per se, but I just go where the writing leads me.

Next week, we’ll continue our look at Elvis Live 1969 and, possibly, get to the actual reason I started this post.

“Speak up for those who cannot speak for themselves; ensure justice for those being crushed. Yes, speak up for the poor and helpless, and see that they get justice.”
Proverb 31:8-9

13 thoughts on “A Squirrel Loose at the Big, Freaky International Hotel (Part 1)”