Although I have restored about 85% of the posts from the first iteration of The Mystery Train Blog, I still have many Elvis posts that I first published on my pop-culture blogs. Since those blogs are now retired, I will occasionally revisit, brush off, and update one of those Elvis entries as a “Special Edition Bonus Post” here on The Mystery Train Blog. As a Labor Day Special, here is the first such bonus post. I am starting with this one because I want to begin adding new posts in the Vinyl Elvis series soon.

For some modern fans, enjoying the music of Elvis Presley is a family experience. This has certainly been the case with me. Mom became a fan in 1956. She later passed her “Elvis gene” on to both my older brother and me. Some of my best memories involve listening to Elvis music with my family. By the time I was in middle school, my brother allowed me to borrow his Elvis records. I would take albums one at a time from his bedroom and carefully play them.

I heard so many Elvis songs for the first time via my brother’s albums. As much as I enjoy listening to CDs and iTunes, there is nothing quite like hearing Elvis on vinyl. These days, my brother no longer has a turntable. Since he felt they would be in good hands, he gave me all of his Elvis albums. His touching generosity more than doubled my Elvis record collection. It has also inspired this series of posts that will examine a variety of Elvis records – starting today with one I received from my brother.

Since the title song is one of my brother’s favorites (mine as well), I have decided to kick off this series with Suspicious Minds, a 1982 compilation album released by the United Kingdom’s Pickwick International on the Camden label.

I remember loving the “in your face” cover of this album when I first played it around 1988.

As far as I have been able to determine, there was not a United States version of this album. This appears to be a German pressing that somehow made its way here to the US.

Side 1 of SUSPICIOUS MINDS (Camden, 1982; from Tygrrius’ collection) | Click image for full-color version

Side 2 of SUSPICIOUS MINDS (Camden, 1982; from Tygrrius’ collection) | Click image for full-color version 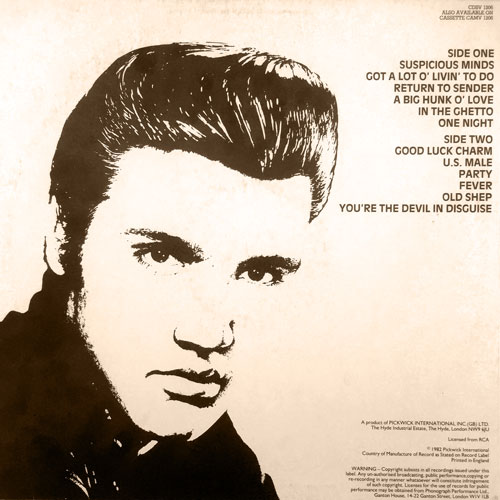 While Suspicious Minds did not contain any previously unreleased material, it is an entertaining album that is well worth picking up if you ever come across it in vinyl format. Thank you to my brother for giving me the Elvis records that inspired this series of posts.

“A friend is always loyal, and a brother is born to help in time of need.”
Proverb 17:17