In the end, two men saved Elvis On Tour: 75th Anniversary Celebration. One hero was who you might expect, while the other was quite unlikely.

By the time I arrived at the movie theater this evening, I was finally excited about Elvis On Tour again. I managed to get my favorite seat – top row, middle – and was ready to enjoy some Elvis.

On screen before the presentation were Elvis trivia tidbits. One card noted, for example, that Elvis On Tour recouped its production cost after three days of its 1972 theatrical release.

When the main features started, the fairly large cinema was full. Up first were the expected commercials: Visit Graceland, go to Elvis Week, see the Viva Elvis production in Vegas, take an Elvis cruise, and, oh yeah, listen to the Elvis 75 4-CD set. A commercial for the Viva Elvis album was surprisingly well assembled and featured “Also Sprach Zarathustra.”

Finally, a behind-the-scenes documentary for Elvis On Tour began. It featured contemporary interviews with Priscilla Presley, Jerry Schilling, and others. It was the kind of interesting “making of” documentary I’ve become accustomed to watching on Blu-rays and DVDs that don’t feature Elvis.

Since Elvis On Tour is an Elvis movie, though, this kind of special feature material will of course not be included in Tuesday’s release. It’s a shame, too, because the documentary was actually quite good. Oddly enough, Tuesday’s DVD and Blu-ray release of Elvis On Tour was one of the few products not advertised tonight. How could they overlook that opportunity? Wasn’t that the whole point of tonight? There was, however, one last plug to remind you to visit Graceland. 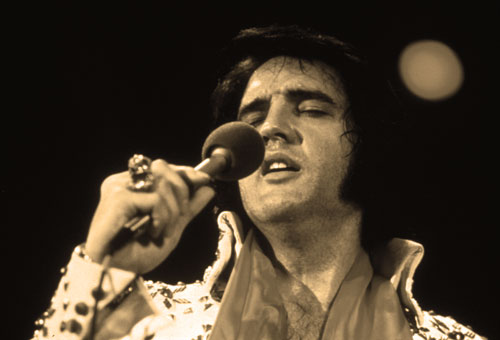 Once the behind-the-scenes documentary and commercials ended – with none of the previously unreleased Elvis footage that has been advertised for weeks – the actual movie began. The lead-off song was, indeed, “Don’t Be Cruel” rather than “Johnny B. Goode.” Bad editing and all. What an amateurish way to start the movie.

The audience here was mostly quiet at first until . . .

. . . the elderly man talking about the freight elevator came on screen!

I’m not kidding! The audience instantly began to roar with laughter as he described in monotone how Elvis would come through one door, then another, and take a freight elevator.

I found myself laughing, too, but I couldn’t believe the reaction at first – then I realized . . . these people have been suffering through this scene for just as long – or longer – than I have. For years, we Elvis fans have been watching this man. I never thought I’d say this, but I’m glad they didn’t cut him out. There’s something comforting about knowing he’s still there to show us how it all works.

From that point on, the atmosphere was charged – there was a lot more applause, singing along, and overall excitement in the crowd. It began to feel almost like I was at a real concert. Almost like Elvis was there.

You see, despite the many mistakes that Warner Home Video and Elvis Presley Enterprises have made over the years, Elvis always wins in the end. These people may not deserve to have Elvis as a “client,” yet he saves them every time.

Would I have gone to the theater tonight if there was no promise of previously unreleased footage? Of course, and I’d be willing to bet everyone else would have, too. My anger comes not from the lack of footage, but from the lack of respect for fans.

I was pretty sure the “never-before-seen Elvis tour scenes” thing would turn out to be false. I was really hoping I was wrong. You didn’t have to mislead us, Warner Home Video, Elvis Presley Enterprises, and Fathom Events. We would’ve been there anyway. Don’t you get it?

There is no excuse.

Selected posts about Elvis On Tour from The Mystery Train:

I have a question for those behind Warner Home Video, Elvis Presley Enterprises, and Fathom Events: Where exactly was the “never-before-seen Elvis tour footage” you have been advertising for the July 29 showing of Elvis On Tour: 75th Anniversary Celebration?

I wonder what the excuse will be this time?

Anyway, I’ll have a review of the theatrical event, which featured the 2010 “Cruel Edit” of Elvis On Tour, coming in an hour or two. . . . Stick around for the fun.

Hoping to find information either way, I’ve been combing through the official Warner Home Video site ElvisTheMovies.com. Though there is nothing there to end the “Johnny B. Goode” controversy, I did find something else of interest.

As of July 24, 2010, with only ten days to go before the Blu-ray and DVD releases of Elvis On Tour, Warner Home Video’s description of both products still includes the following line:

As anyone who has actually watched 1972’s Elvis On Tour can tell you, the songs “Teddy Bear,” “Hound Dog,” “All Shook Up,” “Heartbreak Hotel,” and “Are You Lonesome Tonight” are not in the original movie.

I can only draw three possible conclusions from this:

1.) Warner Home Video has altered the original movie and added these songs, OR

2.) Warner Home Video has included these songs as bonus features, OR

3.) Warner Home Video has not included these songs on the Blu-ray and DVD and, either knowingly or unknowingly, is engaged in false advertising only 10 days before the release.

Note that the quote is specifically from the descriptions for the Blu-ray and DVD releases. Though also mentioned there, this is not from the description for July 29’s Fathom Events theatrical showing, which claims to include “never-before-seen” footage.

In 10 days, we’ll know without a doubt the fate of “Johnny B. Goode” and whether Warner Home Video has been truthfully marketing its Blu-ray and DVD releases of Elvis On Tour. I’m hoping for a happy ending on both counts.

Another official site, this one set up to market the July 29 theatrical release, now includes a new “Elvis Yourself” feature. Over on ElvisOnTourOnTheBigScreen.com, the idea is that you insert a photo of your head in place of Elvis’ and send the result to friends to promote the Elvis On Tour: 75th Anniversary Event.

“Send to friends, and ask them to Elvis themselves too. […] For only one night, you can experience the excitement of what it was like to tour with Elvis. On Thursday July 29, 2010 in select movie theaters nationwide, see the masterpiece Elvis on Tour,” says the site.

Your Elvis photo choices are labeled as “Las Vegas,” “Hawaii,” and “Jailhouse.”

The “Hawaii” Elvis photo is from the 1961 movie Blue Hawaii, and the “Jailhouse” photo is from 1957’s Jailhouse Rock movie. Simple enough.

The “Las Vegas” photo is a famous image from the 1973 Elvis: Aloha From Hawaii TV special. Whoever labeled it obviously made the rookie error of assuming “Elvis in jumpsuit = Las Vegas.” (In case the lei around his neck is not enough of a clue, Aloha From Hawaii was taped in Hawaii, not Las Vegas – lest there be any doubt.)

Outside of the ones he did in Las Vegas, Elvis performed hundreds of concerts across the United States in the 1970s. In fact, that’s the whole point of Elvis On Tour, the very “masterpiece” the site is supposed to be promoting. None of the performance footage in Elvis On Tour is from Las Vegas, either.

Strange that not one of the photos that we fans can go Elvis ourselves in is actually from Elvis On Tour.

Am I being too picky? Maybe, but the point of all of this is to show that these companies should take a couple of hours to learn about who and what it is that they are selling.

Selected posts about Elvis On Tour from The Mystery Train: