Elvis On Tour deserves a 3-CD treatment on the main label:

And then, to complement the above, there should be an Elvis On Tour: The Rehearsals – Volume II CD on the FTD label.

Or perhaps swap out one of the concerts from the set and release it on FTD, and put the disc of newly released rehearsals on the main label boxed set instead – since some may find three concerts from the same week to be too repetitive for a mainstream release (who are these imbeciles?).

After last year’s poorly handled Blu-ray release of the film, I’m not holding my breath for Warner Brothers to release anything new as far as Elvis On Tour video footage next year. I hope I’m wrong on that account, though.

There is, at least, some hope for additional audio releases to go with those from the past.

Thanks for commenting, Mike, and for the quick post idea.

The Mystery Train Elvis Blog didn’t even exist yet when I first posted in January about Elvis On Tour coming to Blu-ray over on my sci-fi blog. Now, over six months later, the Blu-ray release of the Golden Globe winner for best documentary of 1972 is just a month away. The film, featuring Elvis on stage and off during the spring of that year, makes its Blu-ray and DVD debut on August 3 from Warner Home Video.

What I never could have predicted back then is that in even less time than that, fans here in the United States will be able to experience the Elvis On Tour: 75th Anniversary Celebration in theaters across the country. Only 26 days away, the event will feature the entire Elvis On Tour movie as recently restored and remastered for high definition, as well as an introduction by Elvis’ ex-wife Priscilla Presley and never-before-seen footage. Sponsored by Fathom Events, Warner Home Video, and Elvis Presley Enterprises, Elvis On Tour: 75th Anniversary Celebration hits theaters one night only on July 29.

I’ve had the pleasure of attending two Fathom events before. The first, and most spectacular, was a special edit of ELVIS: ’68 Comeback Special to promote the deluxe edition DVD release. I was born in 1975, so I never had a chance to see Elvis in concert. Not only that, but I had never even seen him on the big screen in a movie theater. Fathom Events changed that with this incredible presentation. As an Elvis fan, it was a night I’ll never forget – the closest I’ll ever come to seeing him live.

I’m sure Elvis On Tour will feel much the same way. In fact, if I was born 10 or 15 years earlier, I very well may have attended a concert or two from that very tour, which had stops in my home state.

Be sure to check out Warner Home Video’s www.elvisthemovies.com, which is currently promoting Elvis On Tour and will soon have downloads and a photo gallery.

In case you missed them, here are some of the previous posts on Elvis On Tour from The Mystery Train: 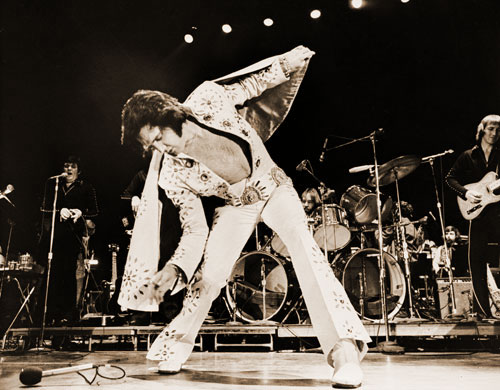 Elvis on stage in 1972 during production of Elvis On Tour

See below for a full press release with even more Elvis On Tour details. Note that it mentions “Teddy Bear,” “Hound Dog,” “Heartbreak Hotel,” and “Are You Lonesome Tonight,” none of which are actually in the original Elvis On Tour movie and, thus, may be part of the “never-before-seen footage” portion of the event. We’ll find out on July 29.

Tickets for Elvis on Tour: 75th Anniversary Celebration are available at participating box offices and online at www.FathomEvents.com. For a complete list of theater locations and prices, please visit the website (theaters and participants may be subject to change).

Since Elvis’s passing, Priscilla Presley has helped keep his legacy alive as an advocate for his music and as the founder of Elvis Presley Enterprises. As someone who knew the king better than almost anyone, her introduction at the beginning of the event promises to express the depth to which Elvis touched the lives of not just those who knew him, but the whole world.

“I was thrilled when I heard fans will be gathering in theaters across America on July 29 for this Elvis experience, and again in August during Elvis Week in Memphis,” said Priscilla Presley. “Those of us who witnessed Elvis in concert know how incredible it was to see him performing live. Now, through this in-theater event and DVD, millions more will get to experience that magic.”

“Elvis on Tour,” Elvis’ last film before his death in 1977, follows The King of Rock ‘n’ Roll as he embarked on a 15-city U.S. tour in April 1972.  More than 25 performances spotlight Elvis’ talent, range and showmanship in captivating on-stage performances and intimate backstage rehearsals with his band.  Shot with multi-cameras and presented in a split-screen format similar to “Woodstock” the movie, “Elvis on Tour” combines concert, rehearsal and backstage footage to provide all the excitement of having a front-row seat at the show. Concert performances include “Burning Love,” “Don’t be Cruel,” “Teddy Bear,” “Hound Dog,” “Love Me Tender,” “Suspicious Minds,” “Heartbreak Hotel,” “Are You Lonesome Tonight” and many more favorites.

Elvis on Tour: 75th Anniversary Celebration also features Elvis’ infamous appearance on the Ed Sullivan Show and his first performance of “Burning Love,” which was so new, he referred to the lyric sheet during the song.

“Elvis is an American pop culture icon and lives on in the hearts of millions and will return to the silver screen for a command performance at this historic event,” said Dan Diamond, vice president of NCM Fathom. “Elvis fans of all ages can experience The King of Rock ‘n’ Roll again in this restored and stunning presentation of the award-winning music documentary.”

During Elvis Week events in August of 2010, a special screening will also take place at The Orpheum Theater in Memphis, the same movie house Elvis frequented as a teenager. Tickets to the Elvis Week showing in Memphis are available by going to www.ElvisWeek.com.

About Elvis Presley Enterprises, Inc.
Elvis Presley Enterprises, Inc. (EPE) is based in Memphis, with additional offices in Los Angeles. In addition to Graceland and its related attractions in Memphis, including the Heartbreak Hotel, EPE is aggressively involved in a worldwide licensing program, merchandising, music publishing, and television, film, video and Internet projects. For more information on EPE and Graceland, visit www.elvis.com . EPE is a subsidiary of CKX, Inc. (www.ckx.com), a publicly traded company listed on the NASDAQ Global Market® under the ticker symbol CKXE.

“There are many things about my father, Elvis Presley, that so many others and I can admire eternally. He rose from humble beginnings and when the realization of his dreams and aspirations exceeded all that he had imagined, it gave others hope – a new awareness of their own potential, whatever challenges they might be facing in life. With his success came the accolades and respect he deserved. However, the fame also brought with it a harsh kind of scrutiny and judgment that no one should ever have to experience. The truth of his artistry and his character always rose above this. It always will. His place in our musical and cultural history, and in so many hearts, will always be secure.

One of the very special aspects of Elvis Presley’s character was his generosity of spirit. He expressed it with benefit concerts and charitable donations that were well known by the public. But most of what he did for others was done quietly, without publicity. My father never once forgot what it was like to want, to need, to do without. He spent most of his life bringing happiness to others, endlessly giving to those around him. It is one of the things that I admire most about him.”
-Lisa Marie Presley, ca. 2001

Any original material is copyright © by the author, 2010-2023. Unauthorized use and/or duplication of this material without express and written permission from this blog’s author and/or owner is strictly prohibited. Excerpts and links may be used, provided that full and clear credit is given to The Mystery Train Blog with appropriate and specific direction to the original content.

Any trademarks or copyrighted material mentioned or displayed are registered and copyrighted by their respective owners. No infringement is intended. This independent site is not affiliated with Elvis Presley Enterprises, Graceland, or any other entity related to the Presley family. Views and opinions expressed in comments, guest blogs, and off-site links are solely those of the respective authors. This site does not sell ads, collect fees, or participate in affiliate marketing programs.