Anton Jeldres Tiselj (AKA Jimmy Cool) was first to correctly answer Elvis Trivialities #6. Not only does Jimmy receive a set of bragging rights, but he also earns a spot among The Mystery Train’s Night Riders.

Roy Webber is the name of the mayor who asked Elvis if he was going to sing “I Ain’t Nothing But A Hound Dog,” in the movie Elvis On Tour.

With MGM cameras rolling for the documentary, the Roanoke, Virginia, mayor met Elvis on a Woodrum Field tarmac on April 11, 1972, when the singer arrived for his appearance at the Roanoke Civic Center that evening. Webber presented him with a key to the city, which Elvis verified would fit the bank vaults. Webber also gave him a guitar-shaped floral arrangement, which Elvis proceeded to accidentally break. 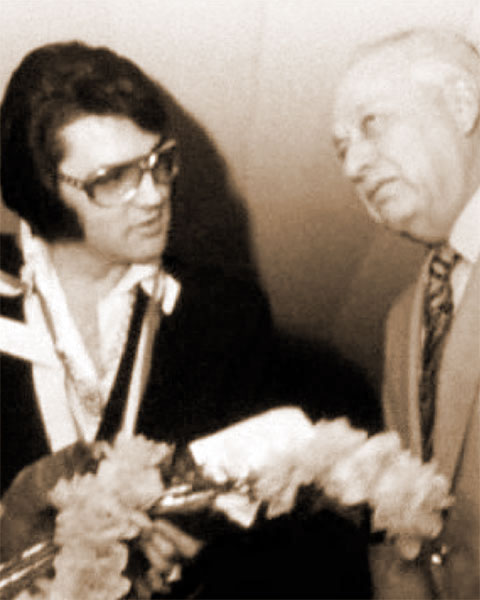 Here’s the story behind what appeared on screen. Besides being mayor, Webber was also a florist. The guitar was actually made by his his company, Roy L. Webber Florist. He was in the middle of his second stint as Roanoke mayor, which began in 1968. He first served as mayor from 1949-1954. While still in office, Webber passed away in 1975 at the age of 71. However, his floral business remained open for over thirty years after that.

The next question could come along at any moment. It might be later today. It might be next month. Or, maybe not until next year. The best way to have a chance of joining the ranks of Jimmy Cool and other past winners is to subscribe to The Mystery Train Blog using the feature in the menu bar to the right. That way, you’ll be notified by email as soon as a new post appears.